The Royal All Stars Cheer & Dance Academy is committed to excellence. We strive to build self-confidence, character and a good work ethic within each cheer athlete. We value effort, diligence, teamwork and positive sportsmanship. 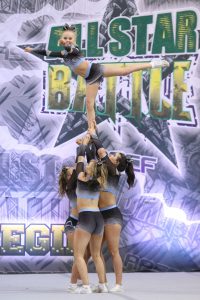 The Royal All Stars Cheer & Dance Academy is the City of Casey’s preferred cheerleading club in South East Mebourne! We service students from all over Victoria including Pakenham, Cranbourne, Cranbourne West, Cranbourne North, Cranbourne East, Clyde, Beaconsfield, Berwick, Endeavour Hills, Lysterfield, Rowville and so much more.  We are conveniently located in the heart of the municipal’s art district- across from Westfield Fountain Gate Shopping Centre in Narre Warren. The American style cheerleading has increasingly become one of Australia’s fastest growing sports. We offer a fun but rigorous training program and have a strong emphasis on perfection before progression.

Cheerleading includes a vibrant mix of dance, tumbling, jumps, cheers, stunting and routine building.  It incorporates many floor movements used in gymnastics and calesthenics as well as jazz dance moves. It is exactly what you have seen in the movie “Bring It On” or on ESPN with the amazing stunts, jumps and pyramids. The good thing about cheerleading is that you do NOT need to be good at one specific skill. It’s a great sport to start at young age as well as easy to pick up when you are older!

We at Royal All Stars Cheer & Dance are always looking for girls and boys of all ages, abilities, shapes and sizes to join one of our energetic and fun teams. Our experienced coaches will guide each athlete to develop effective and exceptional skills.  We believe that our cheer athletes should be taught in a progressive manner with safety and proper technique being of the utmost importance.  We strongly believe in the notion that while we have separate squads, we are all ONE CLUB!